Hey everyone! Enjoy these photos taken from this past weekend’s adventure to Pine Island Conservation Area. It’s been quite a while since I visited this spot, and it did not disappoint. Although not really an island itself (at least not any more), it is on Merritt Island, very near the Kennedy Space Center (the Vertical Assembly Building is easily visible) and the wildlife refuge.

My thanks to Jim Eager for helping me properly identify the really blue Tricolored Heron. I had not realized the variation in breeding males, and had almost committed to calling the bird a Little Blue/Tricolored Hybrid!

Also thanks to the members of the Brdbrains e-mail list for helping me sort out the Swamp Sparrow identification. I tell you what, sparrow ID is HARD, even for experienced birders. If you struggle with these “little brown jobs”, don’t give up and know you’re in good company. 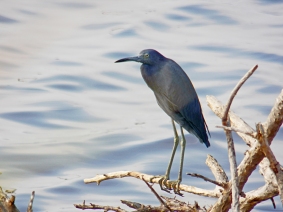 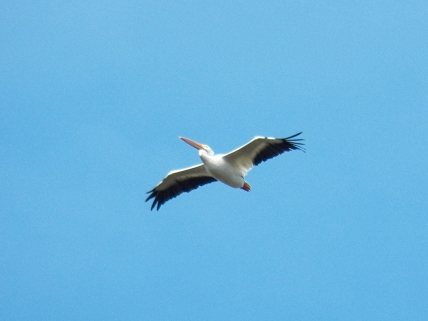 Sunday morning, I decided to check out Pine Island Conservation Area to see how it’s settling in for the winter. The restoration efforts continue for the southern half, but little has changed for the rest of the park.

I always underestimate Pine Island, and it always ends up taking longer to do whatever I’m trying to accomplish there compared to other birding spots. The main pond is over 1.35 km (.84 mi) long, and I walked a total of 6.5 km (4 miles). Bird densities are usually low, except for the vultures, so you have to work a bit for it.

My day was significant for a couple of reasons. One, was sighting a yellow variant of a House Finch. I’ve seen orange variants described, but never a yellow one. I first noticed a normal reddish individual and then the yellow one nearby. At first I thought it was a warbler with a deformed beak, but after a prolonged look in the binoculars, all the patterns and shapes of a House Finch were there. The call notes from the individual were also in keeping with the rest of the House Finches in the branches close by. The bird came into the light, during a 2nd sighting, enough for two photos, only one of which it wasn’t facing completely away from the camera.

Unusual or “aberrant” plumages, while rare, are normal. There are even occasional reports of yellow cardinals!

Another great find was a flock of American Wigeons sitting at the far end of a secluded pond. I could only see them through some dense understory and they were back-lit, but I’ve included this photo. The glare was so bad in the binoculars that I had to rely on this photo to identify them.

I don’t often see American Wigeons, but when I do, I prefer they aren’t back-lit and far away.

Pine Island usually has large groups of both Black and Turkey vultures, but this time as they took to the sky on the first thermal of the day, they had a diverse mix of soaring birds with them. In a single large kettle (that’s a group of birds circling in a thermal together) I saw Anhingas, Ospreys, Wood Storks, Red-shouldered Hawks and even some gulls and terns, in addition to both vulture species.


Nothing says “Good morning!” like a swarm of vultures!

I scared up a number of egrets and herons through the morning, with the Tri-colored Herons being the most vocal and skittish, as usual. There were fewer waders in the main pond than I expected, but there were a few larger alligators around the area, so perhaps they sought out a safer place to be.

There was this nice group of waders, though. A nearby Red-shouldered Hawk had them a little on edge, but they had obviously found a great foraging area, so they stood their ground. Eventually the commotion generated by the Common Gallinules annoyed it enough to fly away, and everyone calmed down enough for me to get this group shot.

A motley crüe…er, crew, of waders!

My morning ended with a nice mixed flock of finches and warblers, including a Prairie Warbler, a very yellow Palm Warbler with some grayer friends, and a few Yellow-rumped Warblers and House Finches for good measure.

Merry Christmas, Happy Chanukkah, and Happy whatever holiday you choose to celebrate!

Lots of silver linings this morning.

It was a soggy start to the day today at Pine Island Conservation Area. To echo the somber mood, the birds that were visible looked suitably forlorn in the damp.

Believe it or not, I stayed in the car for quite a while until the conditions improved. The rain did very slowly taper off.

There were Barn Swallows zipping around, and I could hear Killdeers somewhere across the pond (though I didn’t see any until much later).

I managed to flush a pair of Bald Eagles, in adult plumage, from a nearby tree. In the mist I thought they were Black Vultures and didn’t have my camera ready. They flew across to the opposite side of the pond, where a nest was also visble.

Eagle’s nest through the drizzle.

Bald Eagle pair in the distance through the rain (really working at my camera’s limit here).

I could hear Common Gallinules in the marsh areas, but they stayed mostly out of sight. I did see one Loggerhead Shrike and various herons. Most of them seemed skittish, though one Great Blue Heron stuck around long enough for a photo-op.

I did feel bad for the vultures. With the rain and lack of sunshine, there were no thermals for them to take advantage of, so they just sat in the trees, hunched like they were stuck in the rain waiting for the bus or a cab.

As I said, eventually the rain began to let up, and with it my birding (and other) fortunes. Along the path running to the west of the pond I heard a “twit twit twit” call and came across my first Northern Waterthrush!

The irony of finding a waterthrush on such a soggy day was not lost on me.

While I was watching that little one, I was paid an unexpected visit from a creature that was either really overly friendly or horribly near-sighted.

I’ve had close encounters with armadillos while hiking and birding before, but I’ve never had one come up like this. It even sniffed by boot before scurrying off. I don’t think it was ill, just hungry and preoccupied (and nearly blind).

Quite a few butterflys were also around, despite the rain and drizzle. This Mangrove Buckeye was one of several.

The spots on the wings are designed to ward of predators. If you were looking to make a meal, it looks like the butterfly has huge eyes on its wings, watching your every move. Better to go find a less alert dinner!

I usually see White Peacock Butterflys too. Today they were either trying to mate or really chasing each other around for territory (or both). Note the lower left wing is missing a piece on this individual.

This species also has eye spots, though they are less obvious than on the buckeye species.

As a child who spent just about any available non-school hours outside catching frogs, snakes and anything else, I am quite familiar with garter snakes, but until today, I’ve never seen a BLUE one.

Bluestripe Garter snakes are normall found in northwestern Florida. I must admit it was a bit of shock seeing an otherwise familiar animal with such bright blue.

Close-up of the head. What a cutie!

[EDIT: Dr. Kenneth Krysko of the Florida Museum of Natural History and the University of Florida told me via e-mail that blue striped garter snakes are sighted all over the state. He also said, “Because of this, many of us suspect that this is another example of a named subspecies based on arbitrary color pattern.”]

As I began heading back toward the parking area, the sun started to break through the gloom. The first birds to perk up were the vultures. They used their broad wings as solar heaters to warm up and prepare to take advantage of the day’s first thermals.

I missed what could have been a pretty epic photograph because I was cleaning water off my camera lens. On one tree limb was a Downy Woodpecker, a Red-bellied Woodpecker and a Northern Flicker. They dispersed before I could get the camera set.

As I got closer to the car, I noticed a sparrow running through the grasses and undergrowth along the wide path and then in the parking area itself. Strangely, a mockingbird seemed to be shadowing its steps from atop the wooden railing around the parking area. It took some careful stalking, but I managed to flush it into a sapling long enough for some photos. I had to consult my Peterson field guide, and what do you know? It was a Lark Sparrow! Not impossible or unprecidented, but not common in eastern Florida, even in migration.

Hello, what have were here? Welcome to Florida!

It’s continued to rain today, but I ended up not minding the touch of grey. I saw a life-lister, a blue snake and had a personal greeting from an armadillo.

The species list for the day, including Pine Island Road (in and out bound):

I wonder, who’ll stop the rain?