Another phenomenal encounter we had in Churchill was one late afternoon as we were coming back from Cape Merry and points north of town. We saw a vehicle stopped along the side of the road and quickly pulled over to see what the action was. There was a Red Fox a few dozen yards from the roadside, apparently eating its dinner!

It didn’t seem to want to leave its supper, though, and came back toward us. It hung around, uncertain, for a few more minutes before again running off, but never straying too far from sight. I managed to get a pretty good video, too!

We had a great time on the Tundra Buggy tour at Wapusk National Park! We saw many bears, including a rare sight: a mother bear with 2 “COYs.” COY stands for “Cub of the Year” and indicates the cubs are just shy of their first birthday. Some of the bears came very close to our buggy. Mrs. Lonely Birder was over the moon! The day was capped off by an impressive sun pillar. Marvelous. 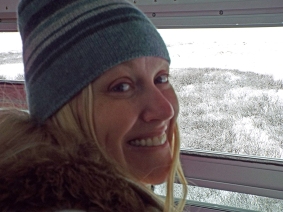 Mrs. Lonely Birder was so excited! 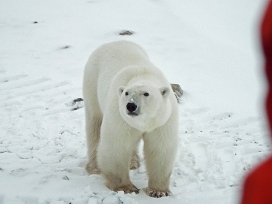 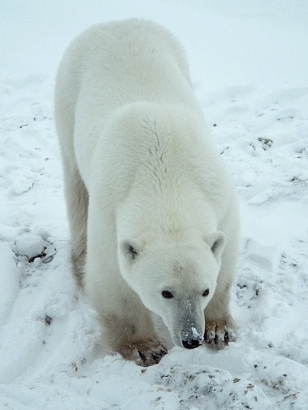 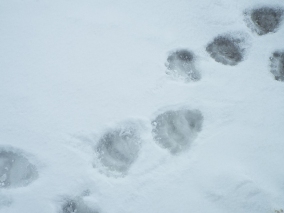 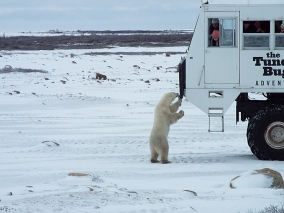 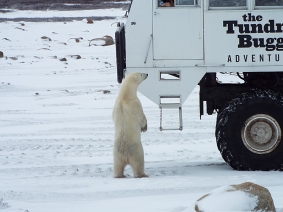 “Does this bus stop at Churchill?” 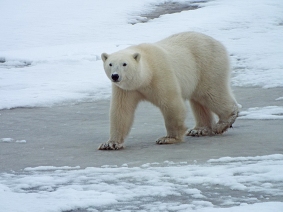 Many of the bears like to rest in the willows 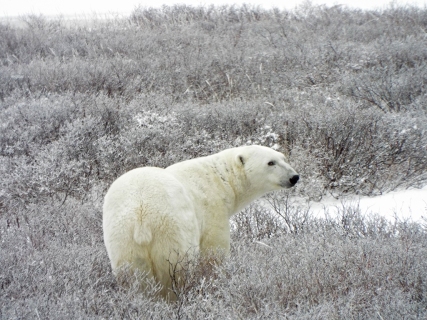 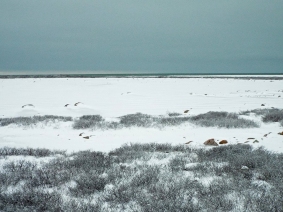 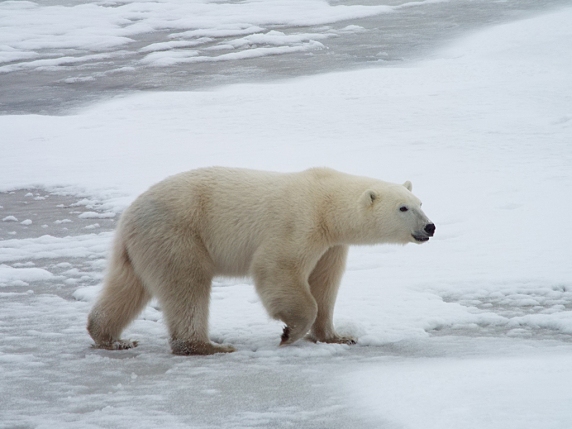 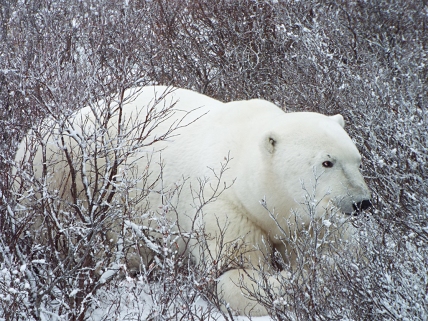 I did manage to see a few birds as we trundled across the tundra:
http://ebird.org/ebird/view/checklist?subID=S25694428

Things got a bit contentious at times, with many people crowding at windows or on the outer porch on the Tundra Buggy. It helped to be a bit aggressive to get some space to see the bears. It was a magical day in any case. These bears, and the land they inhabit, are majestic, beautiful, and perhaps dangerous. I felt truly privileged to be there, and feel quite thankful for the opportunity.

We managed to get some spots on a dog sled ride with Wapusk Adventures on our second day in Churchill. The rides are offered by David Daley, a charismatic and confident Metis man that initiated the Hudson Bay Quest race in 2004. Rather than give you a biography, I refer to you this Frontiers North blog that does a great job explaining what Dave and his team (humans and dogs) are about and how much love and respect there is for these incredible canine athletes.

These dogs are born wanting to run, and are happiest when out pulling sleds. Their excitement was palpable and contagious.

While waiting for our turn to ride a sled, I noticed several Gray Jays flying nearby from tree to tree. Some of Dave’s dog handlers were feeding them out of their hands. It was reminiscent of some Florida Scrub Jays.

I also caught a very brief glimpse of a Boreal Chickadee – a species that I missed while in Minnesota this past February – but then it was our turn to ride the sled! I took a video of the 1+ mile lap we did, but it is a little shaky  (especially toward the end)

Wapusk Adventures jokingly calls this the “Ididamile” and even had some novelty certificates printed up. But behind this showman exterior, Dave is a competitor and driven individual. He’s run his dog teams on some long treks (and does all he can to keep them healthy and happy).

We learned quite a bit about dog sleds and how they work together in teams. Lead dogs are in front, followed by point dogs. Next are the team dogs, and then those closest to the sled are the wheel dogs. Wheel dogs are usually the thoughest dogs, as they feel every movement and resistance of the sled more than the other dogs. But they are all necessary for a good team. Every dog has a personality and strength that is accommodated, and even which dogs run together is a function of how they get along. It’s pretty remarkable. Our teams were small, so the point and team dog positions were combined. Here’s a good page on dog sled positions: https://iditarodoutsider.wordpress.com/tag/sled-dog-positions/.

Another special day and good fun in the frozen north!

While we were in Churchill we had good aurora activity for 3 nights in a row! This was the first time either of us have seen the Northern Lights! There was a moderate geomagnetic storm this past week. Gail, whom we met at the B&B, is an “aurora hunter” and has traveled with her husband, Ben, to Iceland and Alaska to get good views. She helped me with some camera settings, and on the 3rd night of displays I tried my hand at some long exposure shots. [Note: Aurorae do not generally look this bright green to the unaided eye; the effect is more of a ghostly green – think “glow-in-the-dark” – but either way, they were breathtaking!]

The next several posts will be (mostly) non-birding related, so bear (har har) with me. Mrs. Lonely Birder and I spent several days in and around Churchill, Manitoba during the annual Polar Bear migration. The bears are heading to Hudson Bay in anticipation of the sea-ice forming so they can start hunting seals. The bears have been doing this for milennia, but Churchill is a comparatively recent obstacle for them. This means that bears occasionally make their way into town or near the airport. When this happens, the bears need to be encouraged to leave, and fatal encounters are exceedingly rare (for both bears and humans).

We stayed at The Bear’s Den Bed & Breakfast, met some fine people and had a great time. Here is a gallery of photos from around Churchill. The stone structures you see are called inuksuit (the singular form is inukshuk) and inunnguat (singular form is inunnguaq). According to The Canadian Encyclopedia:

Inuksuit are placed throughout the Arctic landscape acting as “helpers” to the Inuit. Among their many practical functions, they are used as hunting and navigational aids, coordination points and message centres (e.g., they might indicate where food was cached). In addition to their earthly functions, certain inuksuk-like figures have spiritual connotations, and are objects of veneration, often marking the spiritual landscape of the Inummariit — the Inuit who know how to survive on the land living in their traditional way.

The Inuit also construct a stone figure called an inunnguaq (plural inunnguat), which means “in the likeness of a human.” This familiar stone figure with head, body, legs and arms is often mistakenly referred to as an inuksuk. Its purpose is more symbolic than functional. Because of its humanoid appearance in the likeness of a little person, its image has become a popular cross-cultural symbol.

Most non-Inuits refer to both as inukshuks. I am not sure if any of the ones in town are “actual” inuksuit or inunnguat or if they were constructed for tourists.

The tallest building in town is the Holy Canadian Martyrs Roman Catholic church. It’s steeple is visible from almost anywhere, and so it provides a good landmark when you’re first venturing out into town. There’s a really cool “eskimo” museum next to the church showcasing local indigenous art and historical artifacts. 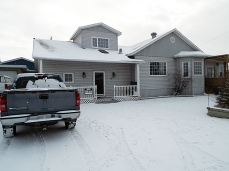 One of many Common Ravens in town 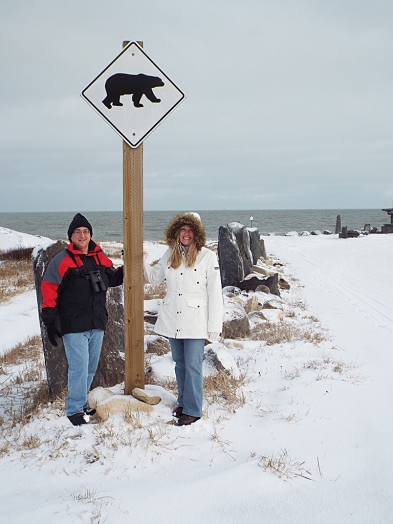 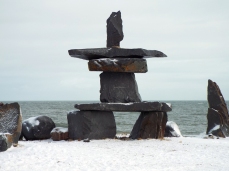 An inunnguaq by the beach 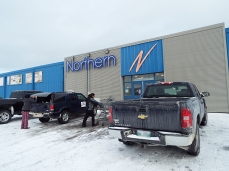 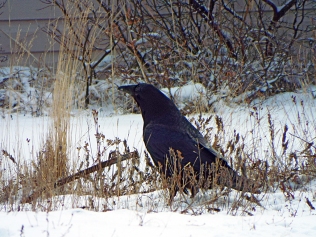 Another of the huge area ravens 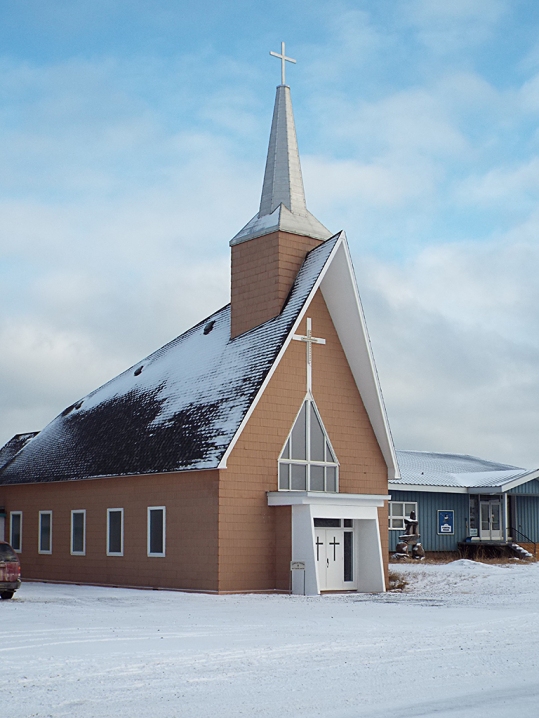 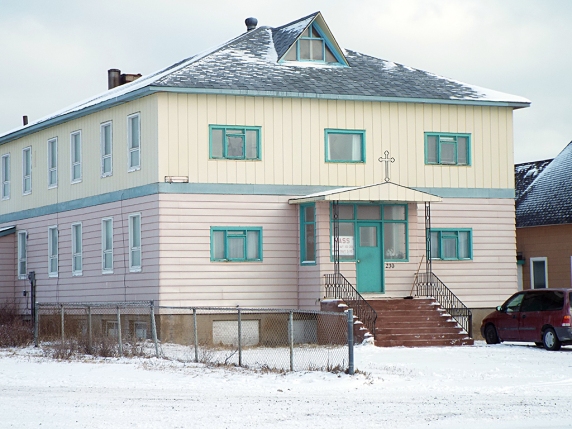 Hope for seeing the real thing! 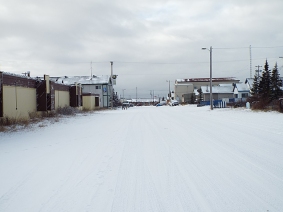 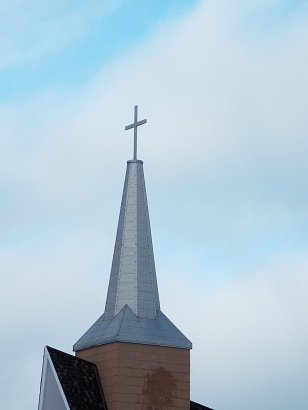 That pink purse has got a lot of miles on it.

On the north end of town, overlooking Hudson Bay, is the Town Complex. This huge building houses the heath clinic, school, a pool, skating rink, playground and other community spaces. The Canadian Government built it for the town to serve as a safe place to learn and play. It’s especially important because winter temperatures can drop to under -40°C (same number for °F)

We arrived on Halloween, which is usually a big deal at the Lonely Birder house. It’s a huge deal for Churchill. The government authorities and volunteers keep a perimeter watch around the whole town to keep Polar Bears away so the kids can trick-or-treat in safety. There are several large costume parties (for kids and adults). We were so exhausted from our travel (we had to get up at 3:30 to get to the airport in Orlando) that we ended up missing the big party at The Seaport restaurant, but we were settled into the B&B as kids came to trick-or-treat.

The only birds present in town were numerous House Sparrows and quite a few Common Ravens.
http://ebird.org/ebird/view/checklist?subID=S25695458

I suggest using Google Map’s street view to get a good sense of the town’s layout and what businesses are there.

We had a great time, and there was lots to do, as you’ll see in upcoming posts!