After spending most of our first week around Bristol and Somerset, we started our second week by heading southwest to the county of Devon and spent the day around Dartmoor National Park [map].

Dartmoor is an upland area covered in low vegetation and bogs, with granite outcrops (called tors) and very few trees. Large areas are covered in English Bluebells, which even in the intermittent morning overcast were beautiful. Ruth told us that the flowers were past their peak, but the vivid purple was still quite a sight.

There are few trees on the moor. The large, ancient forests that covered this land were slowly cleared over the centuries. Human activities, like grazing and farming changed the soil, making it acidic, further converting the land. A few trees do grow, and there are small sections of forest remaining, and there are restoration efforts under way in part of the park.

Dartmoor has hundreds of tors. These prominent high points, some topped with granite knobs or spires, are important landmarks and many can be seen for miles away (by the way, you may have noticed I’ve been using miles and feet in these UK posts. As metric as Britain is, roads and distances are more often still in “imperial” units).

Much like the Cheesewring (which we’ll see in a future post), these outcrops are completely natural. The shapes and apparent layers are due to persistent wind and water erosion over the course of many millennia.

For large parts of the moorland gorse and bogs dominate the landscape. Here is a patch of gorse without the iconic yellow flowers. This thick cover is ideal for protecting various bird species which nest or roost within. I saw Meadow Pipits, Eurasian Stonechats, and even a couple of skylarks.

Dartmoor is famous for it’s wild ponies. They can seem quite tame and will walk up to visitors and even touch you with their noses or flanks. But they are wild and should be treated with that level of respect. Many of the mares had foals.

As we wandered around near one parking area, one pony walked up to my wife and did in fact touch its nose to her hand. The mares were relatively unconcerned with our proximity to their offspring.

We drove to a few more vantage points around the park, including looks at the prison (“HM Prison Dartmoor”) and more tors. From there we made our way past Buckfastleigh and to the ruins of Holy Trinity Church [map]. On the adjacent cemetery grounds is the mausoleum of Richard Cabell, on whose legend and death Sir Arthur Conan Doyle based “The Hound of the Baskervilles”. 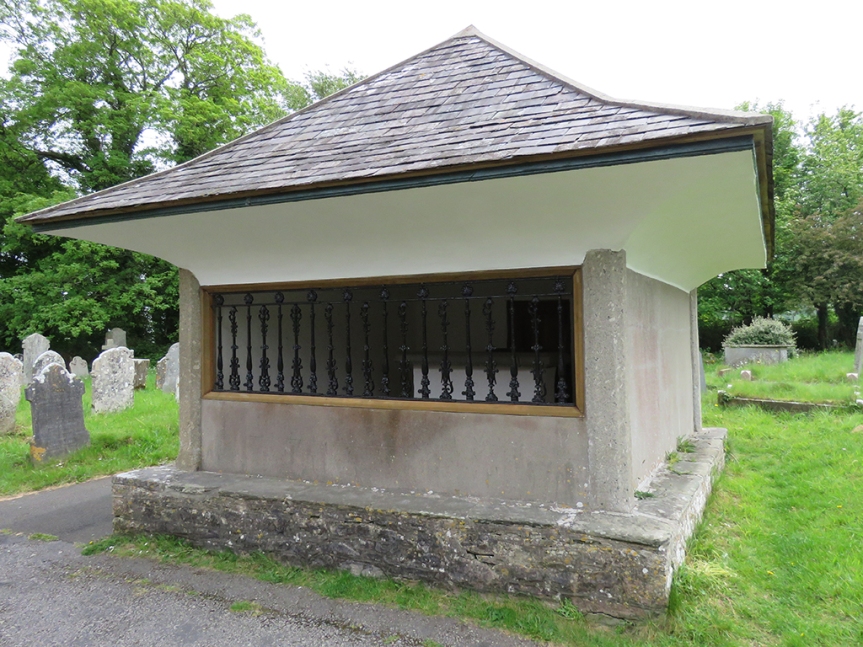 Cabell was said to be an extremely angry and mean person, and would set his large dogs upon trespassers on his land. When he died, he was placed in a relatively unadorned mausoleum, beneath a heavy stone surrounded by iron bars, to “…prevent his coming up and haunting the neighbourhood,” according to an early 20th Century travel guide to Dartmoor.

The church itself is in ruins now, victim of vandals and arson in the 1990s. The elements have deteriorated the structure and the headstones more quickly than one might expect. This, combined with lichens and mosses growing on the stone makes the churchyard look even older still.

The church, cemetery, and Sir Richard’s mausoleum are popular tourist attractions, and we saw a couple of tour groups and photographers making their way around the grounds. 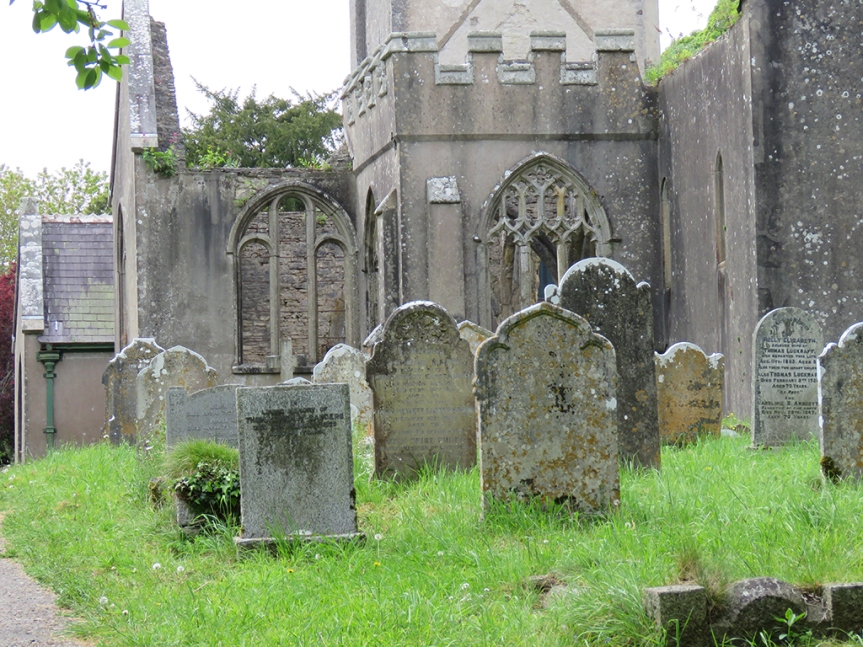 We left Master Cabell and his company of headstones and started for home, though we’d visit Dartmoor a couple more times during our stay in the UK. You’ll have to stay tuned for those upcoming posts!