This past weekend I attended the Florida Ornithological Society’s spring meeting, near Brooksville, FL. Along with a paper session, keynote speech, and membership meetings, we also had a series of field trips throughout the weekend. I’ve never birded Hernando or Citrus counties, so this was a great opportunity to see some different habitats and maybe get some First of Year (FOY) or life birds.

The first field trip was to nearby McKethan Lake [map]. Despite a strong breeze, the day was lovely, and the lake was gorgeous. A group of about a dozen of us, including keynote speaker Dr. Bob Askins, make the 3-mile hike around the lake.

The lake is circled by mature Live Oaks and a lovely hardwood-palm hammock habitat. We heard Red-eyed and White-eyed Vireos singing, despite the wind noise. Our trip leader and some others also heard Yellow-throated Vireos (I did not). We were also visited briefly by a small flock of Tufted Titmouses that were clearly agitated and vocal about it!

A Barred Owl pair and two chicks had been reported the day before, and we searched the trees for them with no luck. But then someone looked up and saw one of the parents, quite out in the open. It was probably looking out for the other owls, although as you can see, it might have been asleep on the job.

The lake was fairly devoid of water or wading birds. We’re well into spring now, so anything besides Mottled Ducks and maybe some Mallards would be rare. Aside from an egret or two, and a few coots and gallinules, the lake was empty.

One species of note was my FOY Hermit Thrush, which flushed onto a low branch in the woods for a few seconds before disappearing before anyone else had a good look at it.

Back at the Chinsegut Retreat Center [map], where the meeting was based, I decided to talk a walk around the grounds. The usual resident birds were singing, including Northern Cardinals, Northern Parulas, American Crows, and Mourning Doves. A Yellow-throated Warbler was singing in one of the large oak trees, but I never got a look at it.

I met with the vice-president of the Friends of Chinsegut Hill, who was out and about on an ATV with a tool trailer. He told me a bit about the property and directed me down a path that led to an abandoned dining lodge.

The building was creepy. So creepy (the photos do not do it justice) that I was unwilling to go inside on my own. I might have just been convinced to try if I had been with someone else. 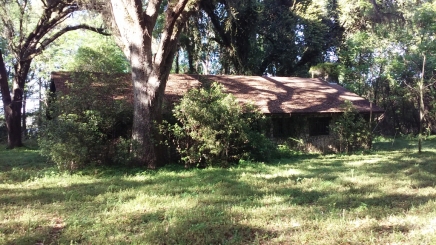 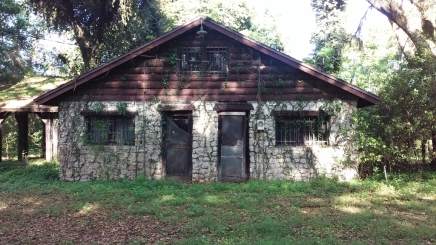 The property and surroundings are gorgeous, with a large manor house at the top of the hill, with several air-conditioned cabins, with bathrooms for each room. There is a nearby conservation area, and we were just down the road from the Withlacoochee Training Center [map] (for the Florida Forestry Service), where we had our keynote session and banquet.

Saturday morning was a fair bit cooler, and the breeze was really starting to pick up. One group of us went to the Weekiwachee Preserve [map]. The preserve is a reclaimed sand mining operation with several large and deep ponds (the abandoned sand pits) and some large grassy areas, fringed with woods. There is some limited marsh vegetation along the edges of some ponds, but nothing to support large numbers of waders. Likewise, due to the deep water and low plant production, the biological activity of these lakes are limited, so they also do not see large numbers of ducks or other dabblers and divers.

The open grassy areas are potentially good for sparrows and upland wrens, but with the wind, we didn’t see anything like that. A few optimistic Forster’s Terns, Bald Eagles, and some overflying gulls were all that we saw over the ponds. We had a little more luck in the trees, including Eastern Bluebirds, a Pileated Woodpecker, and a few others.

On our final day, some of us went to Fort Island Beach Park [map] to look at shorebirds and take our chances to find some Seaside Sparrows. While the sparrows were a no-show (probably due to the wind), we did get a nice group of shorebirds before the beaches had too many people arrive.

Across the parking area was some salt marsh habitat where some Clapper Rails were calling back and forth. On a hunch, I left the group and walked over. The sun was still low on the horizon, making the entire marsh back-lit and hazy looking. Despite that, I could see two Clapper Rails out in the open and got some low-contrast photos before rejoining the group.

After checking out the shoreline, the group walked onto the boardwalk path into the adjacent hammock [map]. Almost immediately upon walking in, I saw a female Prothonotary Warbler on the side of a palm tree. She quickly took stock of about 20 people walking toward her and made a bee-line out of sight. A few of us tried to coax her back out (mainly by pishing), to no avail.

I walked down one part of the boardwalk in pursuit of a chip note I kept hearing. To the right was a dead palm tree with a woodpecker hole in it. Then out popped a little bird head, and a Red-bellied Woodpecker called out. He seemed content to call from the safety of his home for a few minutes, but he did eventually venture out. I didn’t hear any calls back from either a mate or other males. That white line through the center of the image is some string that was partially wrapped around the tree. It didn’t seem t be blocking the nest hole, but there was no way to reach it to remove it, in any case.

A few meters more along the boardwalk, I saw a flash of red, which I immediately thought didn’t quite look right for a Northern Cardinal. The bird didn’t fly too far, and I saw it was a male Summer Tanager. I’ve previously only seen females or non-breeding males, so this was a good bird to find. He was active and reluctant to stand still for long.

Another birder and I watched him for as long as we could, before he finally worked his way deep into the hammock. He did come out later and some other members got some good looks and photos.

I walked back to join up with the rest of the group and found them congregated under an oak tree, intently looking with binoculars. There were two Red-eyed Vireos and a Tennessee Warbler foraging in the canopy. It took some patience and iBird Pro referencing before I could discern the Tennessee Warbler – a life bird for me! There were also two Yellow-throated Vireos in the dense vegetation.

The boardwalk exited the hammock by the beach. I walked to the right and found a path behind some mangroves and over some small dunes. There was a small wetland there with cardinals and some House Wrens singing.

I decided to see if anyone wanted to check the area out, as I heard some softer chip notes, and I went back to see who might be interested. On the dune crossover I had to step over this gorgeous Gulf Salt Marsh Snake.

Ultimately I got Jim Eager and Karen Askins to come over with me. We flushed a male Prothonotary Warbler, who tried to hide in the mangrove trees. Jim didn’t manage to get a look at him, but the yellow on his head and throat was the brightest I’ve ever seen on a bird. It was shockingly yellow. He would not come out of the mangroves for a photo, however.

We walked back out to the beach and joined the main group to try our luck along the shoreline for wrens or sparrows. We did get a couple of Sedge Wrens to sing out, but nothing else showed itself. It was still breezy, which likely kept the smaller birds hunkered down.

We went out to a couple of other locations to find Seaside Sparrows, but didn’t have any luck. At Red Fish Hole [map] a Marsh Wren was singing within a couple of feet of us in thick tangles of rushes, but we could not see him. He kept singing and didn’t fly out or away. Otherwise there was not much activity.

It was a busy and enriching weekend. I was glad to see both new and familiar faces, the paper sessions were informative, and Dr. Askins’ keynote speech was well received. In six months, we’ll meet up again at Archibold Research Station, in Lake Placid.