We had our first field trip for the Florida Master Naturalist Program‘s Freshwater Systems core module today. The class spend several hours at the Viera Wetlands, looking at the various plant and animal communities and how they fit into what we are learning about Florida’s herbaceous wetlands.

I note that I FINALLY got my lifer King Rail today, just after my batteries died for my camera. It’s just as well, since after a brief 2 second flight after being flushed, the bird disappeared into the reeds. I was super excited nonetheless!

Here are some of the photos from the morning. 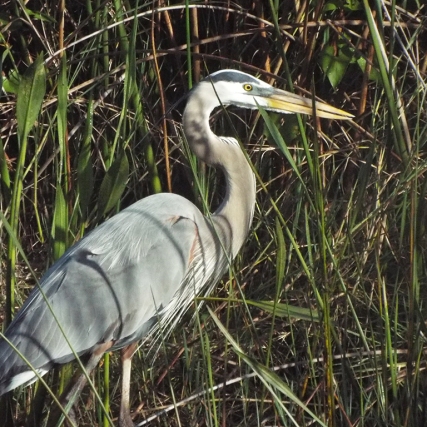 A Great Egret with an American Bittern, hiding in plain sight.

A Hooded Merganser, looking for his mate.

I learned a bit more about the plant communities, including a song/rhyme to help us remember the differences to otherwise confusing vegetation types:

Rushes are round,
Sedges have edges, and
Grasses have nodes
From the crown to the ground.

Hundreds of American Robins were in flight over the wetlands all morning, and the American Coots are starting to assemble in larger and larger rafts. There are still very few ducks, though. I did notice huge flocks of ducks headed toward Merritt Island, in the afternoon from Riverwalk (the flocks were far in the distance, but numbered in the thousands), so perhaps they are finally set to arrive.

We finished up the day with classroom time at the Riverwalk Nature Center. Classes are off next weekend because of the Space Coast Birding and Wildlife Festival! It’s almost here!