Sunday was an epic day-trip around much of Merritt Island National Wildlife Refuge and part of Canaveral National Seashore. It was overcast and windy with intermittent showers, but the birding was worth it. I’ve highlighted a few of the stops here, but you can link to all the hotspots and bird lists at the end of the post, via eBird, for everything seen.

On Playalinda Beach, there were huge flocks of Northern Gannets and Brown Pelicans, as well as various terns, scoters, and shore birds.

One small group of White-winged Scoters flew quickly by, as well as more distant, large flocks of likely Black Scoters. There was at least one predatory jaeger (unknown species) and what seemed to be a shearwater of some sort, far offshore.

One Sanderling, well up from the surf, caught my eye. It seemed to be resting, but it kept peeking its eyes out, watching.

After watching for a while, I noticed it was swiveling gently, back and forth. Like a weather vane, the bird was turning to align with the wind, perhaps to keep from getting blown over while it rested on one leg.

There was a mixed group of terns, which included Royal, Forster’s, Sandwich, and at least one Common.

A few Black-bellied Plovers were working the beach. These birds’ winter plumage is much less dramatic than their breeding plumage, but the way this species moves and stands usually makes it quite easy to pick out in any case (to me they look almost delicate and timid at times). 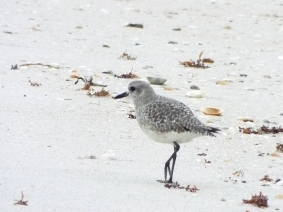 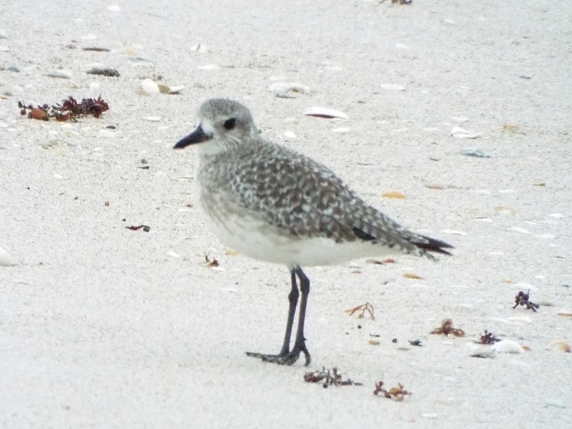 At the end of Shiloh Road, at the extreme northern end of the Indian River Lagoon, there were hundreds of American Coots.  In fact if you include the many rafts of coots along the canal, there was easily over a thousand! There were a few scattered Northern Shovelers, but not much else in the way of duck species. In fact, so far this fall, it seems the ducks have been slow to arrive. There have been no reports of Northern Pintails yet, and just a smattering of Redheads and Ruddy Ducks.

Most of Peacocks Pocket is closed for hunting until February, and a search for reported Nelson’s and Saltmarsh Sparrows along the first part of the road didn’t come up with much.

Blackpoint Drive was unexpectedly closed, perhaps due to one of the massive downpours that were blowing in and out of the area.

Bio Lab Road, however, proved more fruitful, if a bit hard on the nose. From time to time, due to algal blooms and other phenomena, the lagoon will really, really, smell. The wind coming off the water and right into the car (with open windows for birding, of course) was nearly overwhelming at times. It didn’t seem to bother the many Dunlins and Least and Western Sandpipers who were foraging among the stench filled foam at the water’s edge. 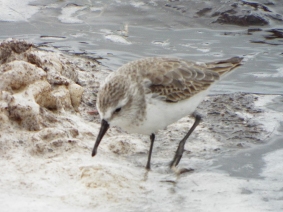 Here are all the stops and eBird lists for the day, which include the first of season Ruddy Duck at Vista #8, and first-in-forever White-winged Scoters at Playalinda Beach.

It was a really good day, despite the closure of Peacocks Pocket and Blackpoint Drive. I had never been to Playalinda Beach before, and it was a real treat. If you want a fairly good idea of what the beaches of the Space Coast would be like in their “natural” state, have a visit – but tread lightly. Beach habitats are especially sensitive to human disturbance.