Two weeks ago, I headed to the recently opened Lake Apopka Wildlife Drive with Camille in an attempt to see a few select species that have been reported there on eBird and in the e-mail lists. I was most hopeful to see both an Orchard Oriole (last seen by me in Marlinton, WV over a decade ago) and a Yellow-breasted Chat (which I last saw at Bear Rocks Lake in West Virginia in the same time-frame). There had also been reports of a Shiny Cowbird, which is quite rare.

The oriole and chat were no-shows, but for summer-time birding, you can’t go wrong with Lake Apopka. We hooked up with some other birding folks and convoyed our morning away.

At one point, while trying to observe a distant Yellow-crowned Night Heron, I flushed a Bobcat out of the grass and right past Camille! By the time I turned around, it was gone! Below are some photographs from the trip. 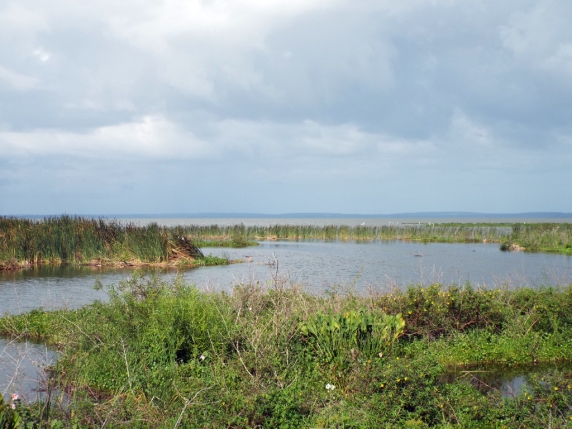 Possible King Rail voice. Where are you?

Line of mostly Barn Swallows. What’s that 2nd from the right?

I would have thought this bird was a grackle if I hadn’t known beforehand to expect it.

This Purple Gallinule had several fledglings. 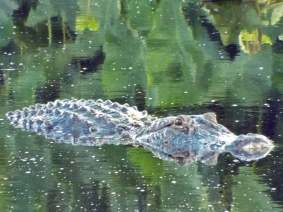 After the Wildlife Drive, we drove around to the North Shore Restoration Area loop trails for a few minutes to look for Blue Grosbeaks (we did find one!), then drove around the general area north of the lake before heading back home. Near the canal by the northwest side of the lake an adult female Eastern Bluebird was perched while an adult male flew around nearby.

The final highlight for me was the quick glimpse of a Gray Kingbird on West Jones Ave. This species is usually found along the coast, but a few have been regularly reported near the lake this summer.

Here are the links to the eBird lists for the follow species: