I must apologize for the lateness of this blog post. I’ve been suffering from some sort of writer’s block and it’s caused me no end of headaches. Luckily, I had uploaded most of the photographs already, so I’ll use them as a scaffold to tell you about my and Camille’s birding adventures this past Saturday.

Our primary goals were to try to see the Fulvous Whistling Ducks reported at Brinson Park in Kissimmee and then to find Snail Kites around the lakes near St. Cloud.

Brinson Park is just at the north of Lake Tohopekaliga (or Toho, for the more tongue-tied of us) and overlooks the lake and some mudflats with a sidewalk that follows along most of its length. This is part of “The Florida Trail”, which runs from Big Cyprus Preserve and eventually to Pensacola.

Brinson Park is a great place for wading birds. We saw White and Glossy Ibises, various herons and egrets, and even a Black-necked Stilt. But the dominant wading birds were the Roseate Spoonbills and the Limpkins. It seemed that a majority of the spoonbills were juveniles. In fact, it was hard not to see the place as a sort of cool hang-out spot for teen spoonbills away from adults.

As for the Limpkins, I have never seen so many together in my life. Most of them were flying and squabbling out over the water, but a few were closer in. Limpkins are adapted to feed on snails – particularly the large snails found in central Florida lakes. Their bills are actually slightly curved at the tip to allow for easier access into the snails’ shells. This gallery shows one of the limpkins going about it’s breakfast.

I scanned the horizon for raptors and other soaring birds and was quickly rewarded with the first Snail Kite of the day! We weren’t expecting it at this location, but I got a good look at it in the binoculars as it circled overhead and then landed on a post out in the water.

Nearer the shore were several ducks that I could not initially identify. It took a bit of watching and field guide checking, but they were immature Muscovy ducks. Muscovys are a feral species, and most birds in central Florida have a varied plumage, belying their domestic heritage; however, the juveniles are surprisingly uniform in appearance.

Along the vegetation below the sidewalk level there was a large brood of Muscovy chicks with their mother. It was clear that these ducklings are used to being fed, because they ran as fast as they could to where we were standing and watched us expectantly. I verbally apologized, telling them that people food (and bread in particular) was not good for them, and they needed to stay closer to Momma.

When their mother arrived just after them, they eventually settled down, but would occasionally glance up at us in case we changed our minds.

Meanwhile, along the road and sidewalk areas, both in the landscaping trees and the brushy vegetation at the edge of the lake, there were many fledgling and immature Boat-tailed Grackles creating a huge amount of noise. Alongside the adults feeding in the grass were three species of dove: Mourning, Eurasian Collared, and White-winged. One particularly handsome White-winged Dove let us get fairly close. The striking “eyeshadow” marking and red eye, along with that white racing stripe make for a gorgeous bird.

Back at the water’s edge, a family of Limpkins was also enjoying some breakfast. Some of the slightly older chicks were following an adult around and getting fed with the others hunkered uneasily in the reeds, but not out of sight.

We walked around the lake shore and even crossed the road to see if the Fulvous Whistling Ducks were there, but we only got good looks at some groups of Black-bellied Whistling Ducks, a few Mottled Ducks, and more Limpkins and herons. There were some Purple Martins on the electrical wires, and several Marsh Rabbits eating and playing by the lake shore.

We really hung around a while hoping for those ducks, and we had a couple of very indeterminate and distant sighting of ducks that might have been what we were looking for, but the combination of distance and lighting made it impossible to tell. We headed over to St. Cloud and East Lake Tohopekaliga to get more Snail Kite views and see what else was afoot (or a-wing, I suppose?).

Lakefront Park is north of St. Cloud on the southern shore of East Lake Tohopekaliga. It was a beautiful morning, but surprisingly uncrowded for a Saturday. There were more Limpkins in the marsh grasses, and other wading and wetland birds scattered throughout. Camille even saw an American Bittern scoot across the park into some vegetation.

Right across from the parking area were about 8 or 9 Sandhill Cranes. Four of them were vocal and conspicuous, their shrill bugle-like calls all but drowning out any other sounds.

Meanwhile, a larger, even more imposing crane watched those four from a distance away. I don’t know if the others were juveniles or unattached males vying for a mate, but this crane was having none of their nonsense and eventually after a very loud call, sent them flying away.

While this was going on a family of Loggerhead Shrikes was feeding on insects on the ground, and then flying up in to the trees right by our heads. One young bird was keen on showing off its skills and got an earful from his parents as it strutted its stuff.

As we got toward the overlook pavilion, a Snail Kite flew past, close to shore, its unmistakable white rump and orange bill visible even without optics. 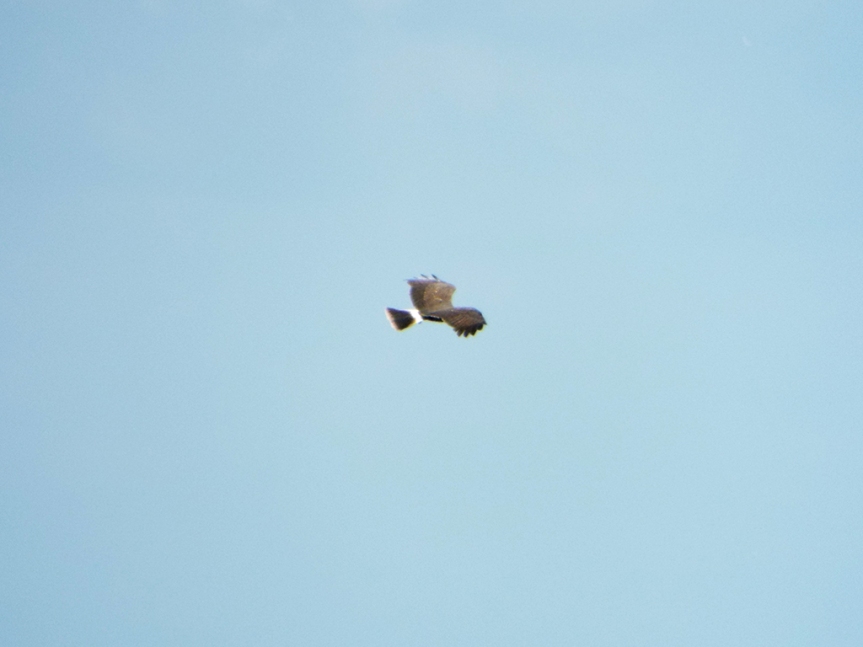 Nearby, Boat-tailed Grackles were making territorial displays and perhaps still vying for mates. One particular male seemed to get challenged multiple times, but each time the competition skulked away after a particularly loud round of chirps, bill rattles and squawks. 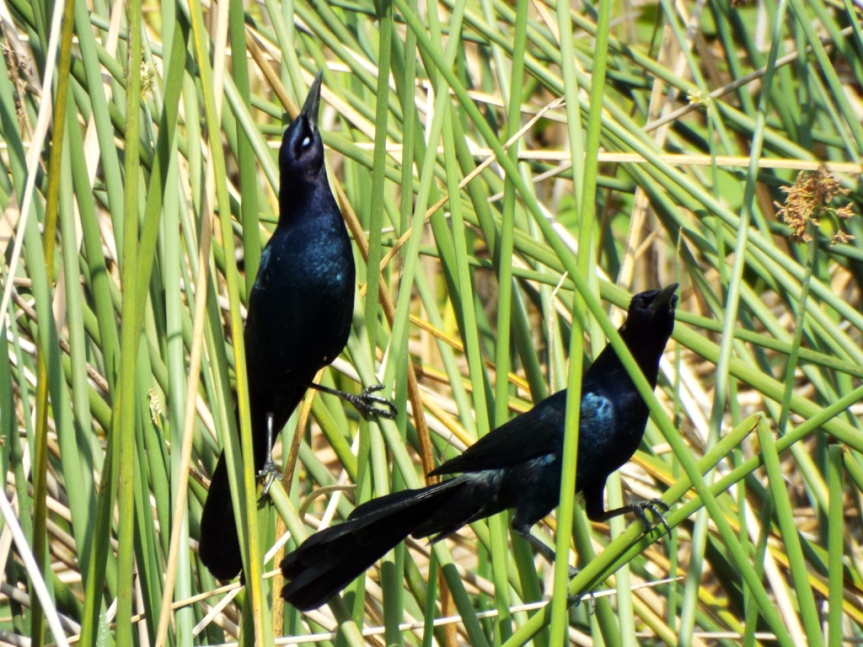 We waited for more Snail Kites and even searched around for some Fulvous Whistling Ducks, but to no avail. A trio of white feral Domestic Ducks approached us hoping for a handout, and there were more Limpkins nearby. We went back to Camille’s vehicle to decide on our next destination. While we discussed our plans, two more Snail Kites circled in from the west, along the shoreline before flying back out over the lake. We decided to visit Runnymeade Conservation area, just to the southeast. 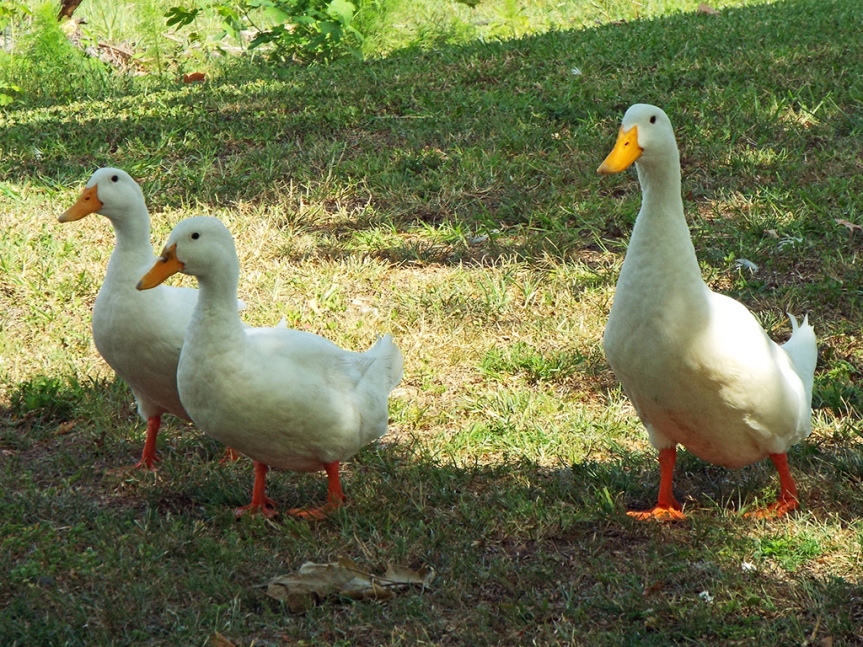 Runnymeade is primarily a Live Oak wood with a bit of scrub along its edges. This sort of arrangement is sometimes called a monotypic community. Most of the trees were reasonably mature, but the woods are isolated from a larger community by residential development and Runnymeade Lake.

I could hear (and saw a few) Northern Cardinals as well as Tufted Titmouses. We were visited, briefly, by a band of Downy Woodpeckers, too. Otherwise, it was quiet through most of the woods. In the scrub area we tracked a White-eyed Vireo that stayed very well hidden, despite it being only twenty or so feet away (based on the sound). We only ever caught the briefest glimpse of it between trees.

We decided to end the morning (by now early afternoon) back at East Lake Tohopekaliga, at Chisholm Park. This area is east of Lakefront Park and consists mainly of some picnic pavilions and a boat ramp. Just as the other lake area, Limpkins were conspicuous and active. Each sign by the boat ramp had a Limpkin atop it, calling loudly and refusing to fly away even when noisy boats came up tie up, or talkative birders sidled in for better photographs.

We hung around for a bit, when we glanced up at some soaring birds. At first I thought they were all vultures, but one bird was being harassed by a Red-winged Blackbird.

It was another Snail Kite. There were two, actually. One made its way down to a post beyond the reeds, while this one flew higher and higher in an attempt to shake off the blackbird. There’s a good chance these were the same ones we saw earlier at Lakefront Park, but there’s no way to be certain.

We watched the kites for a bit and then decided it was time for lunch and to head back to Brevard County. We may not have got our Fulvous Whistling Duck this trip, but the Snail Kites were a nice treat (and a first of year for me, a lifer for Camille).

My complete list (including the parking lot before we left in the morning), and part of the ride back, through Osceola Conty, roughly in order of first identification:

This was the first real outing with my new camera. My poor Kodak Z990 was having increased motor problems and would often not write images to the SD card, and would sometimes refuse to respond to any commands or button pushes. It’s been on a steady decline since my trip to Minnesota, and I had to replace it.

My new camera is a FujiFilm FinePix S9900W. It’s got a slightly longer reach in the max zoom, and I’ve increased from 12 megapixels to 16. I still have to get used to the settings and menus, but already I am really loving this new camera.